Guest Author and Giveaway: TJ Michaels - Melissa Schroeder
Hey all *tj waving madly*! How is everyone doing? Hopefully well. If any of you are Facebook junkies, like me, you may know that I was recently in Austria for the day job while sick as a dog. If I don’t see another bottle of NyQuil for the next ten years, it will be too soon! Gah!
I’m SO looking forward to the Authors After Dark readers convention in New Orleans. I can’t believe it’s only 4 months away! If you’re going, be sure and let me know if this blog post so we can try and get together in NOLA! I’m running a contest centered around the predicted Zombie Apocalypse from now until AAD in August. I’m giving away a book every week, plus grand prize winners will be announced at AAD – Four premium gift baskets from the ZART authors, and One paid registration to AAD Savannah next year!
Now on to more the cool stuff – NEW RELEASES! The inspiration for this book is different than my usual stories. Usually something at the day job or something I’ve seen while traveling inspires a story. But this one, Silk Road, is a bit different.
I was watching Discovery one day and a documentary came on about lost books of the bible. My brain said, “Huh…there are LOST books? Never heard anything about that when I was growing up.” And that program drew me right in and held me captive. After that I picked one of those lost books, did a crap-ton of research, invented some mythology to go along with the results of that research and began the first book in the Seals of Destiny series, Silk Road. 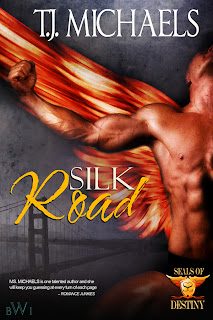