Well, the Schroeders have been on a roller coaster the last few days. Thankfully, it looks like we will not be homeless but we are still waiting to finalize everything.

Harmless News
I have been editing A Little Harmless Fascination. I am finally happy about it which rarely happens this early in the process, so that kind of worries me, lol. I have been double timing it, writing Possession rough draft and it is going scary easy. I will warn you, because of certain things, Possession will not be BDSM. Mainly because it doesn’t fit the characters. There might be a little play here and there, but no heavy BDSM. Not sure about Surrender. A Little Harmless Submission is off for formatting for print. It will be releasing right around the time that A Little Harmless Addiction does this May. Not too long after that will be the Infatuation print release. I wasn’t going to do it, but I love all the Harmless Military covers, so I really wanted them in print. I will be adding the Harmless shorts to it so it won’t be too short. That will be releasing about the same time as the others in print.
I had a notion of doing another Harmless really fast. Problem is, because we have to move ourselves, thanks very much for that Maxwell Housing Office, I won’t have the time to do that one, with the next two books I have planned.

So, next up will be some paranormals. I have not decided which way to go yet. I know I have had a lot of emails about Angus and I wanted to talk about The Cursed Clan. I love this series. Just love it. I love all my books, but this really allowed me to play a little bit. And, for those of you who are looking for more paranormal in the storyline, it will expand with each book. As the clan works to break the curse, the magick surrounding them will increase.

The other paranormal I have is By Blood: Desire. This is the first of my Victorian vampire books and one that Kris Cook and Joy from Joyfully Reviewed won’t leave me alone about. The idea was born back in 2009 and was the last project I shopped to NY with my agent. They all said it wouldn’t work, then proceeded to put out their own versions. Thanks for that, lol. But it is another book where I get to mix it up with an entire world built within the ton.  I am kind of excited about it and hope that readers like it.
Here is the blurb: 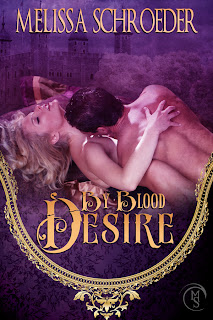 Nicodemus Blackburn has seen the best and worst of mankind. Five hundred years of dealing with them teaches the vampire to be very wary of the creatures. Unfortunately, alarming events leave him no choice but to enter the world of the ton to hunt a villain. He must find a rogue vampire, one who is making his own army of blood thirsty vampires. Searching for the villain is not the worst of his troubles. That can be laid at the feet of bluestocking Lady Cordelia Collingsworth.


Cordelia has always been an outcast, even in her own family. She has forged her way in the world with her ability to write, and Nico Blackburn is the focus of her next article. Before she can obtain any information about the mysterious man, she is pulled headlong into a scandal that leaves her with no choice but to marry Nico—a man with dangerous secrets.


Thrust into a world she knows nothing of, Cordelia finds herself falling in love with a man who claims to be a vampire. As their passion grows, so does the danger around them and Nico will have to call on all of his powers to protect the one thing he has realized he cannot live without: his opinionated, infuriating, and thoroughly delectable wife.