A special Infatuation price for EVERYONE! - Melissa Schroeder 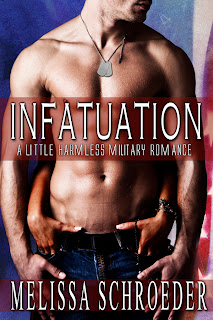 So, I wanted to do some promos and see what happened. The free book thing for ALH Submission and Callum was a great success. I am very irritated though because I cannot offer free books to Nook, KOBO, etc readers. So, to do something across the board, I have decided to lower the price of Infatuation for TWO WEEKS everywhere. It will be available at every outlet at the low price of .99!  So starting today, until the 15th of April, I will keep the price at the lower price everywhere.

I am actually thinking about doing this with new releases. But, in order to do that, I need your help. I need to prove to myself that I can make a profit by offering new releases at this price. So, if you could spread the word, let everyone you know about it, that would be FANTASTIC!

So, how can you let everyone know? If you have a Facebook page, post the link to this page. If you are on Twitter, let people know with a link here. Word of mouth is very important. If this goes over well, I might very well consider it for new releases as I said before. I am already contemplating it for my June release of By Blood: Desire, so please, spread the word. And if you didn’t pick this up now is the perfect time to do it!

To prove her love and save her man, she has to go above and beyond the call of duty.

Francis McKade is a man in lust. He’s had a crush on his best friend’s little sister for years but he has never acted on it. Besides that fact that she’s Malachi’s sister, he’s a Seal and he learned his lesson with his ex-fiancé. Women do not like being left alone for long months at a time. Still, at a wedding in Hawaii anything can happen—and does. Unfortunately, after the best night of his life, he and Mal are called away to one of their most dangerous missions.

Shannon is blown over by Kade. She’s always had a crush on him and after their night together, it starts to feel a little like love. But, after the mission, Kade never calls or writes and she starts to wonder if it was all a dream. Until one night, her brother Mal drags him into her bar and grill and Shannon gets the shock of her life.

Kade isn’t the man Shannon knew in Hawaii, or even the last few years. Losing a friend and being injured changes a man, especially one who had never felt so vulnerable. He still can’t shake the terror that keeps him up at night. Worse, he is realizing that the career he loves just might be over.

Shannon is still mad, but she can’t help but hurt for the man she loves. He is darker, a bit more dangerous, but beneath that, he is the Kade she’s known for so many years. When he pushes her to her limits in the bedroom, Shannon refuses to back down. One way or another, this military man is going to learn there is no walking away from love—not while she still has breath in her body.

Warning: This book contains two infatuated lovers, a hard-headed military man, a determined woman, some old friends, and a little taste of New Orleans. As always, ice water is suggested while reading. It might be the first military Harmless book, but the only thing that has changed is how hot our hero looks in his uniform—not to mention out of it.
This is an original novella that is approx 32,000 words.

One Comment on “A special Infatuation price for EVERYONE!”