Guest Post: Lissa Matthews - Melissa Schroeder
A few months ago, I decided to self publish Masked, a short male/male story. It was originally a free read on my website and through one of my publishers. I took it, expanded it, got a cover for it and put it up for sale at Amazon, Barnes and Noble, All Romance eBooks, and a few other places. It didn’t too bad, but it didn’t do great. I wasn’t disappointed though. Readers kept and still keep asking for more.
I chose to start out self publishing with something I didn’t normally write for a few reasons.
One, I had the story and could work on it and get it up in a relatively short period of time.
Two, I wanted to try my hand at the male/male genre with a bit of a larger audience because it is one that I want to write more for.
Three, I needed the experience and to get some of the process down because I knew I would be exploring more self publishing in the future.
This little series became a bestseller at All Romance eBooks within a few days of release. Talk about thrilled!
See, writing is my job. I love it. I get frustrated by it. I get even more frustrated by publishers and their processes. There are ups and downs just like in any job and you kind of learn to go with the flow, but one release a year at a publisher isn’t going to do me any good as an author trying to make a living. I’ve decided that the way to deal with this issue is, self publish AND still publish with those who’ve been good to me as well as perhaps trying out some new ones.
I’m not making the level of money as some of my fellow author friends are in self publishing, but success doesn’t necessarily need to be measured in dollar signs. I have loyal readers, a steady income, the freedom to work from home and work for myself, and the ability to learn something new almost every day. There’s freedom in self publishing that one doesn’t have with a publisher, from story length and content to cover art and releasing as many or a few books as one might want to in a calendar year.
There are drawbacks as well. Most books aren’t going to sell a huge number of copies. If you don’t already have a built in audience that you can bring with you and build upon, the marketing and gathering of readers becomes a full time job in and of itself. Lucky for me, I still had a few readers hanging around waiting for me to release something, anything after an almost year hiatus of no book releases at all.
And yes, I do think having a built in audience from having published with a publisher or three, helps. A lot. Not everyone agrees. That’s the great thing, though. There are guidelines as far as how to and how not to, but the process from beginning to end isn’t going to be the same for everyone, the measuring stick for success isn’t going to mean the same thing to everyone, the journey isn’t going to be the same for everyone, and we do have to allow for that.
Some things remain constant. Having a good story. Finding editors. Reading up on the process and talking to others who self publish. Experimenting with tags and keywords and titles and prices and lengths. Hiring a good cover artist. Promoting and guesting and interacting with readers and other authors and industry professionals. Also, knowing what your end game is, what it is you’re looking to accomplish.
I am glad I tried it and I will continue to explore it. In fact, I just self published a free read: Committed: An Erotic Valentine’s Tale. I wanted to give something a little hot and naughty to my readers, something quick, something to let them know I am still, as always, thinking of them.
I will also continue to write for my publishers. They bring something incredibly valuable to my continuing growth as an author. I definitely want my cake and I want to devour the whole thing, too!
Now, for a the shameless promo.
I had a release from Samhain Publishing in December that needs a little more press. 😉 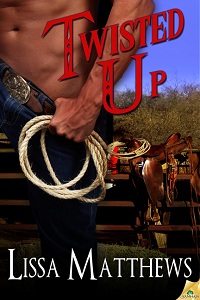 Blurb:
One rope. Three days. And two hearts on the line.
Justin has had enough. Ella, the woman who healed his broken heart, has been cancelling on him for two months straight. Sure, she’s busy with her job, which has her traveling far and wide. But that never stopped her from sharing nights of trivia, long conversations and blazing hot sex—until now. Truth to tell, he misses their easy friendship, the way her sighs fill his ear as he fills her body.
What he can’t figure out is, what’s changed?
At work, Ella finds it easy to talk to rooms full of strangers. Once back at her lonely apartment, though, she’s back to her painfully shy self—until Justin. Their chance meeting grew over the months into a year-long affair, but she can’t shake the feeling that rejection and pain are just around the corner. Best thing to do? End it now, before their intimacy digs too deep.
Suddenly he’s at her door with a length of neon-green rope and a naughty proposition, daring her to say no. Just how good could it be? There’s only one way to find out…
Warning: The sheets are tangled, the hat is crumpled, and the jeans are worn low on the hips. The cowboy is hot, determined, and helpless in the face of bunny slippers. Readers may need extra batteries to get this one out of their system. 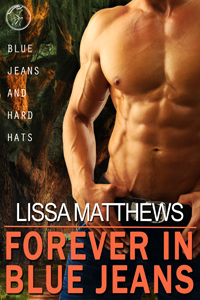 And coming later this month through self publishing will be the third book in my Blue Jeans and Hard Hats series, Forever In Blue Jeans. I’m still working on the finer details of the blurb, however here’s a tiny little teaser and the cover for you to drool over.