Guest Post & Giveaway: Elise Hepner - Melissa Schroeder
Tapping into Creativity
Despite my enjoyment while writing erotica and erotic romance, sometimes I need to do other hobbies that get my creative juices flowing in a different direction. A change of pace is good for my ideas as well as a needed mind refreshment when I’m on a tight deadline. Some of my epic adventures include sewing, crocheting, calligraphy, and beading. But none of them really stuck like writing. While my husband does everything from chain mail to building his own computers, somehow I’m not too good with my hands unless they’re flying across a keyboard.
It’s not for lack of trying either—for the most part I can’t shut off my brain long enough to completely engage in an activity before I’m thinking about an idea for a story. Maybe that’s a sign that I work too much. Or maybe it’s a good thing because it keeps me in business.
Either way I’d certainly love to have the capacity for focus that I use while writing for painting—or anything else hobby wise. Mainly my brain relaxes while I color. Yes, coloring with crayons in kids coloring books is a really fun, relaxing time for me. I went from painting once a week as a child with my grandmother to coloring once every couple months in Strawberry Shortcake and My Little Pony coloring books.
Where most other hobbies failed to capture my attention for long enough than a week, there’s something about spreading pretty colors across a page without having to think about design, structure, or content that is freeing for me. I’ve got nothing to worry about but whether I’d like to use green or blue-green on my sunflower. In fact, I should probably do it more often. Working a job where I dictate what happens, what things look like, and how they come off on the page down to the smallest detail, it’s very nice to not have to worry about the little things when I’m creating in any genre.
I’ve talked to other authors about their need to create other things beyond their books and the inherent need to create textiles outside of our books is a recurring theme. What do you like to create in your spare time?
I’ll be doing a random drawing of anyone who answers in the comments section to win either their own copy of Finger Paintings or a copy of one book from my Ellora’s Cave backlist, winner’s choice. The giveaway will run until the 30th of February. 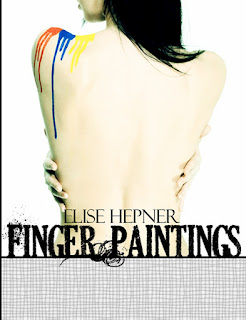 Blurb:
When Calliope finds out about her surprise Valentine’s Day gift—a painting session with a bunch of third graders—thrilled isn’t exactly the operative word. Shot to hell are her dreams of sexually reuniting with her overworked, overstressed longtime girlfriend, Michelle, who hasn’t had time for anything other than a quickie in months.
With one foot in the classroom, Calliope’s floored by the naive, chipper school teacher, Miss Havard. Even better when she gets a firsthand look at the flirtatious way Michelle fawns over the new woman. Yet, Calliope soon finds out that there’s more to her girlfriend’s seemingly innocent V-day surprise. A salacious fantasy unfolds putting their communication—and their bodies—to the test.
Fingers can do much more than paint and sometimes teachers teach much better outside of the classroom.
Warning: This work contains mild D/s play, an f/f/f scene, and explores voyeurism in an elementary school hallway and the backroom of a classroom while kids are at recess.
Excerpt:
Calliope took a quick step forward digging her fingers into the soft flesh of Michelle’s shoulders pressing her girlfriend tighter to the wall. A quiet “squeak” from her girlfriend’s mouth raised the small hairs along Calliope’s arms. With little grace, Calliope forced her upper thigh between Michelle’s legs. So fast Michelle didn’t have much time to react before she was pinned to the wall.
Calliope relished the heated pressure of her girlfriend’s pussy through her panties. A not so subtle tease against Calliope’s jean-clad inner thigh as she tried to keep her head in the game. No matter what happened, Michelle wanted her—that was self-evident. Calliope grinned with slow burning anticipation. She removed her fingers from her girlfriend’s shoulders and slammed both of her palms against the concrete block wall on either side of Michelle’s head.
“What are you going to do now?” Calliope taunted.
Michelle barely flinched. It didn’t take a genius to notice the undisguised lust widening her alert green gaze. True, they hadn’t played Michelle’s favorite dominate and submissive sexual game in a while—but that’s only because after the brutal rebuffs Calliope grew sick of doing all the work only when and where Michelle wanted it. Now Calliope didn’t give a damn, she’d do anything to get them going in the right direction.
When Michelle trembled Calliope sensed every movement against her upper body and savored her girlfriend’s instant submission like a fine wine. She leaned in—close enough to taste the perfume on Michelle’s skin— roses and a hint of coconut sun tan lotion. Michelle’s hands clamped onto Calliope’s waist against her tank top, her little fists twisting into the fabric. One slow, seductive trail of her tongue from below her girlfriend’s jaw, down her neck, and across her skipping, frenzied pulse point left Calliope more than eager for a second, longer taste.
Michelle shuddered tight against Calliope’s leg with a sigh that tickled tiny wisps of hair sticking out along the crown of Calliope’s black ponytail.
Elise Hepner Erotica/Erotic Romance Author
WebsiteEllora’s Cave
Excessica
Twitter