Let’s welcome Barb Meyers to the blog today. Barb was kind enough to offer an ecopy of A FOREVER KIND OF GUY. But more about that later. You need to make it to the end to find out more.

A Series Is Born 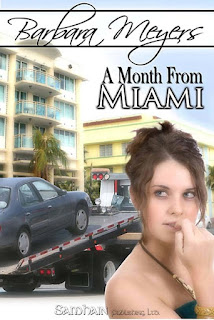 When I wrote the first version of A Month From Miami it never occurred to me that it would spark an entire series of contemporary romance novels.  I mentioned to my editor at Samhain Publishing that I had ideas for two more books based on minor characters in A Forever Kind of Guy, and she said, “Oh, so it’s a series?”
That’s how The Braddock Brotherhood series was born.  The first two books feature twin brothers.  Although the second two books feature heroes who are not blood-related to either Rick or Ray, they are all connected to each other in some way.  All the books are stand-alone stories.
The idea for the third book, tentatively entitled The First Time Again, was spawned by Hayley’s ex-husband, Trey who makes a brief appearance in A Forever Kind of Guy.  He’s a former NFL-quarterback, a small-town golden boy from North Carolina used to getting by on his charm and athletic prowess.  After an injury and unsuccessful knee surgery he medicated his disappointment and pain with prescription drugs and alcohol and eventually drove Hayley away.   Fresh out of rehab he arrives to try to charm her back into his life, but by then Hayley’s learned to stand on her own two feet and she’s no longer in love with him. 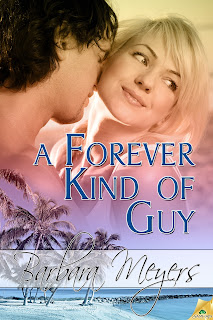 In The First Time Again, Trey will return to his hometown to try to make amends to everyone he let down, including his father.  I loved the idea of a hero who’s basically reforming from a selfish jerk to man of integrity and honor.  He’s been careless with women in the past, and he’s vowed to be more cautious and to stop thinking of only himself.  What better foil for a hero like this than a thirty-year-old heroine who’s looking to shed her virginity?  Baylee had one unsuccessful encounter with Trey in high school that he doesn’t remember but which left a huge impression on her.
I don’t have a title for the fourth book in the series yet, but it will feature Niko Morales, who also appears in A Forever Kind of Guy.  He’s a gang member who decides to do the right thing to protect his son.  His story will find him relocated from Jacksonville, Florida to a wealthy little community much further south.  He’s a sheriff’s deputy seeking funding for a program to keep young men off drugs and out of gangs.  That’s how he meets Lesley, who oversees her family’s fortune and charitable foundation.  A former gang member turned cop and a pampered heiress.  Should be interesting to see how they get together.
Initially, all the books were going to have rhyming heroine names ending in “lee.”  Kaylee, Haylee, Baylee and…I blanked on a fourth one.  I had to change the spelling of Hayley anyway, because it became too confusing to have characters named Kaylee and Haylee in the same book.
Something else all the stories have in common:  there is a child in each of them who doesn’t quite belong in some way to either the hero or the heroine, but who has a huge impact on their lives.
As an author, apparently you never know when a minor character may be ready to have a story of his own.  In fact, there’s a probation officer in book three named Jack Frost who keeps bugging me to make him a star.  So don’t be surprised if my four-book series turns into five!
~~~~
Now for the giveaway portion of the day. Just answer the question in the comments and you’ll be entered to win. Please make sure you leave your email address so Barb can get hold of you.
What do you think of rhyming names in books?
Now off you go. Say hello to Barb and answer the question.
Thank you for stopping in Barb.
Barb on the Web:
Website
Facebook
Twitter