Today’s guest is a Siren exclusive author Carla Angela. Everyone say Hi and make her feel welcome. Now a little about Carla to get you going. 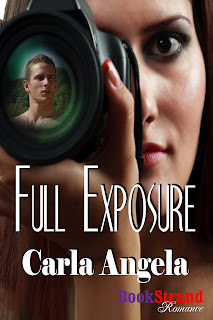 Got a penchant for the long lens? Addicted to the camera flash?
Full Exposure by Carla Angela, surrounds photographer Lake Silva and her new business venture—taking professional online dating photos. Slick, appealing, and sizzling hot…with Lake behind the camera lens! What she doesn’t count on is meeting one male client who stirs up more than just business sense in her.
Hunter Dex is not Lake’s usual customer. He lives in a palatial abode and has ocean-blue eyes and a tanned, muscular body. Despite a photo exhibition of nudes also keeping Lake busy, she can’t help having dirty fantasies about Hunter. But such a gorgeous, rich playboy like him could never be seriously interested in a feisty tomboy like her…could he?
Want to win an eBook copy? Post a comment. Have you ever thought of taking sexy photographs as the photographer or the subject? The comp is open internationally!
Teaser from Full Exposure… Hunter took a few more careful steps inside, not sure whether to stay, secretly poke around and find out more about her—hoping she returned soon, pretending he’d just arrived—or do the right thing and leave.
Mid-thought he stopped, his head cocked to one side. He’d heard a noise coming from the far end of the unit—a splash of water. It sounded echoey like it was coming from a bathroom.
Unable to help himself, Hunter found himself tiptoeing forwards, through the lounge and light-flooded, compact kitchen toward a white-painted bathroom door, which was slightly ajar. Feeling utterly compelled, Hunter pressed one eye up to the crack between the door and the doorframe and swallowed hard. He’d found her. Oh, how he’d found her.
She was lying in an antique-looking, maroon bath, with a white lip and gold claw feet. The wet tendrils of her russet hair clung to her shoulders and snaked around her perky, cream-coloured breasts, like some kind of creeper. Water beaded from her collarbone down to her rosebud nipples. Hunter could imagine sucking those perfect strawberry tits. He felt the front of his pants growing tight, uncomfortable—his jeans imprisoned his member as it grew in size.
Lake’s head was tilted back, resting against the bath’s ledge, and her eyes were closed. She was seemingly content. Her arm, he suddenly noticed, was thrust below the water’s surface, deep, deep below, moving slowly up and down. Hunter could feel the perspiration beading on his own forehead, as much from the steamy room as from the steamy scene before him.
Then Hunter forgot to breathe for a second as a soft moan suddenly wafted from Lake’s pink lips…