Guest: Author Berengaria Brown - Melissa Schroeder
I have a tendency to genre jump. Anyone who has read my author bio will have already worked that out.
Berengaria Brown Bio:
Berengaria is a multi-published author of erotic romance: contemporary, paranormal (ghosts, vampires, fairies and werewolves) and Regency-set historical. She loves to read all different kinds of romance so that is what she writes: one man/one woman; two women; two men; two men/one woman; three men, two women/one man…. Whatever the characters need for their very hot happily-ever-after, Berengaria makes sure they get it.
But one thing I do insist on is having a reason for why my characters act as they do. Which means, why would the relationship come into being? This is not so hard in one man/one woman stories, or two men, or two women. But when you come to explaining a ménage, suddenly it’s more difficult. Sometimes I’ve started writing a story I thought would be between two men, but one man (or both of them!) has announced he’s bisexual, and so it becomes obvious a woman is needed to complete the relationship.
Then I started thinking about societies which have been historically polyandrous. What if these people wanted to keep their traditions? What if they moved to America to follow their traditions? How would that work? Would they be accepted? How would they deal with the official laws of the land, the IRS, the schooling of their children?
From these thoughts the “Possessive Passions” series developed. An underground, hidden community in modern day America, where the old traditions are followed. Where all the brothers share one wife.
But then, what if one family of brothers want to marry a woman not from their community? How would they explain it to her? How would she adjust to a totally different lifestyle? 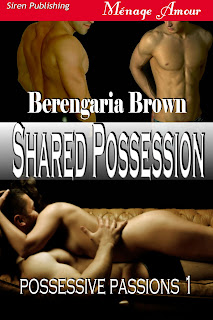 SHARED POSSESSION – POSSESSIVE PASSIONS 1
Buy Link
Blurb:
Chevaunne is abducted by three brothers who take her to a new world where brothers share one wife, who is their treasured possession. Jim, Sam, and Paul have waited years to find the perfect woman, and when they see Chevaunne, they know immediately she is the one for them.
After a mind-blowing night with the three men, Chevaunne marries them the next day in front of the entire community. Now she has to learn a totally new life—a new culture, new ways of doing everything. But the sex is amazing, her men are considerate and loving, and Chevaunne is making friends and settling in.
Soon, though, she begins to wonder if she’s losing her mind. No matter how happy she is, she was kidnapped, after all! What was she thinking when she agreed to stay? 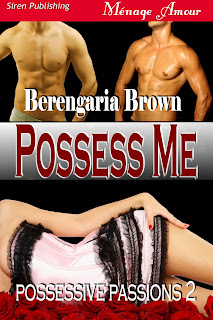 POSSESS ME – POSSESSIVE PASSIONS 2
Buy Link
Blurb:
Shiloah, a New Thimphu native, is envious of her friend Chevaunne’s newfound happiness with her men and wants that kind of love for herself. She has enjoyed working with the luscious Stan and Goa on The Grandparents’ Garden. But now the project is finished, so how will she see them again?
Stan and Goa abduct Shiloah from the garden’s grand opening ceremony and make love to her all night long. The next day, she marries them both in a traditional ceremony. But when Shiloah and her men are offered the chance to run a farm aboveground, she has to consider her mother, Orna, who helps Shiloah run her business and is terrified of life outside the security of their community.
Shiloah is torn between loyalties. Can she find a way to keep everything that is dear to her—her mother, her business, and explosive sex with two men she loves? 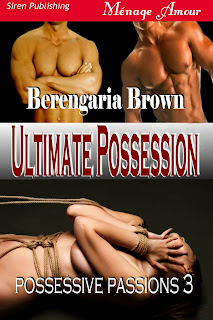