Give a big old welcome to Denise Agnew! She has a great historical to share with you and a Samhain GC! 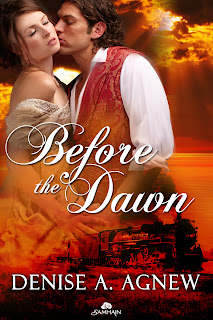 A fallen woman must decide to stay down, or rise and fight…
Elijah McKinnon has been found innocent of a heinous murder, but it doesn’t erase the hellish years in prison he endured. He boards the train to Pittsburgh a changed man, certain he will never feel free until he’s wreaked revenge on the brother who ruined his life.
The passenger who catches his eye is intriguing, but he’s seen her kind before. The kind who puts on airs—and looks down on Irishmen. Still, he can’t seem to stop himself from stepping between her and a pack of ruthless cads.
Mary Jane Lawson is grateful for the handsome stranger’s help, but her journey has a higher purpose: to rise above her shattered reputation and declare her independence, come flood or famine. Propriety says she should refuse Elijah’s suggestion they pose as husband and wife—for her own protection, of course. Her practical side says it won’t hurt to pretend, just this once.
Come nightfall, though, their little charade must be carried all the way to shared sleeping quarters, where their vulnerabilities become painfully clear. And when danger past and present threatens, trusting each other becomes a matter of life and death.
Product Warnings
A hot Irish accent mixed with high adventure may cause combustion. Beware of falling for this hunk. The heroine says he’s hers.