I want to welcome everyone over here at my new blog. We weren’t too sure it would move over so quickly, but Rae Monet did such an incredible design, I wanted it up as fast as possible. So, we are over here at blogspot now. And we have a TREAT for our first day here. Joanne Rock. I have been a fan of hers for years, so I am excited to have here her on my blog. 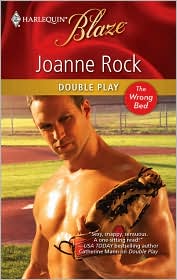 Play-it-safe book reviewer Amber Nichols is so ready to let loose. Her wild one-night-stand arget? Hottie baseball player Heath Donovan. Problem? He’s not exactly who she thinks he is!

Team coach Heath takes one look at Amber…and wants to make her melt under his touch. Groupies aren’t usually his style…but this sexily distracting woman is different. She should be…because she’s not exactly a groupie!

It’s a hot, fast fling with incredible sex! Only it’s soon coming to an end. Because temporary sex, even the earth-shaking variety, never leads to a home run. Unless these two players can let down their guards in time to let them both win this game….

As a baseball fan and the wife of a former sports editor, I have spent plenty of time discussing baseball. Actually, I’ve also spent a lot of time watching baseball, dissecting baseball and reading about baseball. It’s the great American pastime! Or at least it was before Facebook and Twitter came around. But truly, is there any more fun way to spend a summer afternoon than at a ballpark watching athletes competing at the highest level? I like a beer in one hand and peanuts in the other, but sometimes I’ll venture from the standard enough to try a local ballpark specialty.
But aside from the fun ambiance of the game and the thrill of a barn-burner, I really like the idea of the sport as an arena for intense competition. It’s fun to see athletes laying it all on the line to make a play—the diving catch, the throw on the run, the shot into the second tier of the stadium behind left field. It’s a chance to live vicariously and with passion as we cheer for the guys who are giving their all for a win.
I had the chance to visit a Major League park last week on a roadtrip to Pittsburgh to see my husband’s much beloved Cincinnati Reds take on the Pirates. Don’t ask why we can never see a team he likes on their home turf, but I’m forever rooting for the wrong side, it seems. Why couldn’t we go to Pittsburgh to see the Penguins during hockey season, for example? But no. During hockey season, we end up rooting for his much beloved Penguins when they visit the Bell Center in Montreal. And let me tell you, the Montreal hockey fans aren’t nearly as patient with us as the Pirates fans were in Pittsburgh last week! They sure do love their hockey in Canada.
But in the States, baseball has a piece of our hearts and we appreciate the guys who play our game. For their commitment to excellence and their determination to put everything they have into the sport, these guys are hero material. And I enjoyed writing about them so much in last fall’s Sliding into Home that I’ve revisited the baseball world for this month’s Blaze, Double Play. If you like a sports hero, I hope you’ll check out the adventures of Boston manager Heath Donovan and the sexy book reviewer who catches his eye. Theirs is a game of the sexier kind, but I think you’ll enjoy it just the same!
~~~~~~~~~~~~~~~~~
What a fantastic article! Want a chance to win a print copy of signed by Joanne herself of the book Double Play! Just comment below for a chance to win.