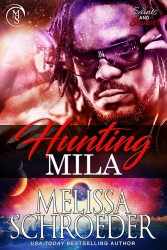 One of my favorite books I published early on in my career is Hunting Mila. I had been published for a little over a year and this was my second of a two-book series (although, I think I need to do Robbie’s story).  This is still a favorite of mine because it is pure space opera goodiness with a hot and cranky British hero. And then there is Mila. She’s a tiny bit of a woman with a potty mouth and a thing for guns and ships. Totally doesn’t fit her debutant upbringing and that is why I love her. And best thing is that it is in KU through January!

Here’s a peek at Mila and John Hunter.

Mila looked around the weigh station as they stood in line to be processed. She hated this freaking planet. Granted, it was partially her fault they were here, but it didn’t make her feel any better about the circumstances.

Twenty years ago, it had been uninhabited—and for good reason. When scientists developed a way to survive in the harsh temperatures of the planet, it had turned into a place people stopped on their way to things more important. Anyone who lived there was insane or criminal. Or both.

The lines were long, which increased Mila’s nervousness. The miscreants surrounding them made her skin itch, but she’d be damned if she would show it. Vulnerability was something that could get you killed.

It was all Hunter’s fault. He’d taken her weapon away, again. It made her feel…naked. Just the memory of the way it felt in her hands—cold, hard, titanium metal—made her heart skip a beat. It was the perfect weight for her. It wasn’t too big as some of the more powerful weapons were and had just the right amount of power. She sighed and gave Hunter another nasty look. A man should never come between a woman and her machinery.

She didn’t like being around creatures who would slit your throat before dinner or for dinner.

To take her mind off them and the asshead who was now fondling her weapon, she looked out the large windows. The view would be beautiful if she were to see it in an ebook, or possibly as a hologram hanging in an office. Jagged cliffs rose from frozen ground, both covered in frigid, thick ice. There were no shrubs, trees or flowers on this planet. Nothing could survive without protection. It was, in her humble opinion, an ice-filled version of Hades.

Hunter’s voice broke into her thoughts. He was, of course, giving her orders.

“Stop frowning. These Estaician guards should be easy to charm. I want you to pull that bit you tried on me earlier.”

She crossed her arms beneath her breasts and studied the male Estaicians. Average height for a male was about seven feet. Their reddish brown skin was covered with freckle-like spots that told her they’d all reached the mating age. She snorted. They did have a thing for human females. Then Hunter’s comment sank in. She straightened her spine.

“I have no idea what you are talking about.”

“Mila.” He sighed. “I don’t have time for this. You and I know what you can do when you bat those fake green eyes. Now do it so we can get through here. Spending time in jail here is worse than a Turkish prison on Earth late in the twentieth.”

“Whatever you say, love.” His voice had deepened, sending her hormones bouncing.

He slid his arm around her waist and pulled her against him.

Leaning down, he brushed his lips against her ear. “I want these people to believe we’re together, and not as inmate and warden. So, shut up, do as I say and I might just save that cute ass of yours.”

Mila knew she should be pissed. She didn’t let anyone talk to her like that—especially a man. But his breath feathered over her skin, causing heat to dance along her nerve endings. His voice flirted, even as he was telling her what to do. Heat increased and then coiled in her belly, slipping down further between her legs. It took every bit of her willpower not to rub up against him like some damn cat in heat.