Seductive Reasoning is on sale! Hey, have you read A Little Harmless Revenge? Then, you met Del and Emma. They are the hero and heroine of Seductive Reasoning, Task Force Hawaii, Book One. Even better, it is on sale for only .99 until September 5!!! Pick it up before the price goes back up to 3.99!

He’s got a killer to catch and no time for love.  Fate has other plans.

Former Army Special Forces Officer Martin “Del” Delano has enough on his hands chasing a serial killer and heading up TASK FORCE HAWAII. He definitely doesn’t need the distraction of Emma Taylor. From the moment they meet, she knocks him off his feet, literally. Unfortunately, she’s the best person to have on the team to make the connections to help them catch their killer.

For Emma, it’s hard to ignore the lure of a man like him. Tats, muscles and his Harley cause her to have more than a few fantasies about Del. He’d never be interested in a geek like her, but she can’t resist toying with him. When she pushes the teasing too far, she ends up in his bed. She convinces herself she can handle it until the moment he steals her heart. 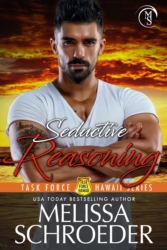 Del can’t help falling for the quirky genius. She’s smart, funny and there’s a sweet vulnerable side to her that only he can see. As Emma gets more involved with the investigation, she becomes the target of the psychopath. When the danger escalates,  Del promises to do anything to save the woman who not only captured his heart but also his soul.