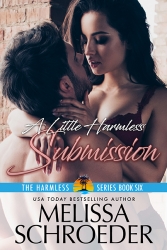 Read an excerpt | Buy the book

For a tough-as-nails Dom, hunting a sadistic serial killer is nothing compared to losing his heart.

Maria is still trying to step out of her legendary father’s shadow and knows just how to do it. Luring the killer by posing as Rome’s new sub seems like a good idea. That is, until undercover becomes real life and she finds herself tangled up with a man who amazes and scares her at the same time. Her growing attraction to the Honolulu Police Detective is a little too much to handle. Even knowing that, she can’t help falling in love with the tough Dom and losing herself in the games they play in the bedroom.

Rome is overwhelmed by his need for Maria. He has never had a sub respond to him the way she does and no matter what he does, he feels himself slipping off that cliff into love. As their relationship starts to unfold, he realizes that he will do anything to win her heart, to convince her to become his sub for a lifetime. But before he can do anything, the killer turns his attention on Rome and the one thing he holds dear: Maria.

» WARNING: The following book contains: A Dom who thinks he can do no wrong, a new sub who is about to teach him he can, palm trees, a trip or two to Rough ‘n Ready, a flirty Aussie Dom with questionable motives, old friends, and a new enemy. Yeah, it might be called Harmless, but you Addicts know it’s anything but.

This is a reissue and has not been changed aside from proofing.