Hawaiian Holidays is on sale! 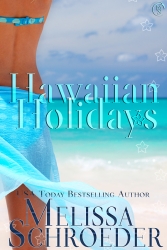 That’s right! I know this week starts the insanity of the holiday season, so I thought with my release, I would also give you a little extra something. If you enjoy menage romance, make sure to check it out. Get the entire collection for .99!

Three stories of menage romance all set against Hawaii during the holidays!

When Sophia Cantwell gets stuck in Hawaii working on Christmas, she isn’t too happy. She doesn’t like trying to buy land from a Hawaiian family, especially when she is convinced her company isn’t being ethical. When she is confronted by cousins Maleko and Jack Akaka at the airport, the landowner’s grandsons, she doesn’t expect the jolt of arousal, or the instant attraction. And she doesn’t expect that they would insist that she stay at the family condos.

Mal and Jack have shared women before, have thought about getting that one special woman for the two of them. Both of them are surprised that she turns out to be an uptight corporate go getter. But, the three of them cannot ignore their attraction, and a night out in Honolulu turns into a night in bed for all of them. When Sophia’s ex-lover, and boss, arrives unexpectedly, will she be able to walk away from her dreams of climbing the corporate ladder, or will she lose Mal and Jack?

Sex on the Beach

Edwina Mitchell, Eddie to her friends, doesn’t think she can have a happily ever after. She grew up with multiple fathers and never wanted to do that to a child. The problem is, she’s in love with two men from her past. When she runs into them in Hawaii, she thinks it is just another carefree weekend, but the guys got another plan.

Drew Masterson and Sean Childress have served their country and now they’re ready to enjoy life. That means opening a dive shop and finding the woman they both love, Eddie Mitchell. When they get a second chance with her, they refuse to fail. With New Year’s Eve approaching, they decide to do everything in their power to convince her she is the one for them.

Maribelle has always been unlucky in love. Bad relationships, bad men, just nothing good. The latest guy is her fiancé, who she found cheating on her at the chapel with her cousin. After dumping him at the altar, Maribelle swears off love. To mend her broken heart she goes to Hawaii to visit her friends Eddie and Sophia. She never expected Damon and Alex to follow her with seduction on their minds, and she never expected them to want forever.

Damon and Alex have been in love with Maribelle for years. When Damon’s stupid brother loses her because of his cheating ways, the best friends decide it’s time to let Maribelle know just how they feel. Seducing her is easy, but convincing her to stay with them is going to be a challenge—one thing neither man has ever backed down from.