Get A Little Harmless Faith on sale! - Melissa Schroeder

Get A Little Harmless Faith on sale!

It’s Valentine’s Day and I have a deal for you that will allow you to save a little bit of money and also escape to Hawaii. The latest Harmless book, A Little Harmless Faith, is on sale this weekend for .99¢!

Snap it up before the price goes back up to $3.99. It’s still in Kindle Unlimited also, so if you have that you can pick it up to read for free! 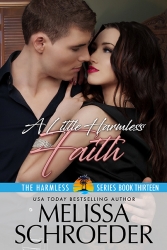 What can a Dom do, when he realizes the one woman he could never live without in business is the woman he needs in his bed?

Jensen Wulf has everything a man could want. Money, power, and more women than he can count. Unfortunately, the one woman he needs is the one woman who is off limits. His personal assistant practically runs his entire family business and any entanglements with her would be a mistake. Still, his infatuation turns to obsession when he realizes she is secretly a submissive.

Nicola McCann knows dreams don’t always come true. She walked away from an olympic career and knows there is no future for her and Jensen beyond the job. It doesn’t stop her from fantasizing about him. He is the ultimate Dom and the sub in her wants him more than her next breath. When he discovers her secret, she gives into her needs with one rule: their D/s relationship ends when they leave Hawaii.

That agreement doesn’t keep either of them from falling in love, even though neither of them will admit it. When someone starts taking potshots at Wulf Industries and Nicola gets caught in the crossfire, both of them will learn that there are worse things than admitting love.

>>Warning: This book contains two hard-headed lovers, many nasty quips, uncovered secrets, Hawaiian scenery, a trip to Rough n Ready, spankings, and scenes so hot you might need an ice cold shower when you are done.