I’ve been writing since I was eight years old. I have several ‘finished’ (unpublished) novels from when I was about fifteen. Argh!!! Truly cringe worthy romance… (Or rather an attempt at it. At this stage of my life my friend’s brother was about the only eligible male I knew, courtesy of an all girl family and all girl school, and he still played with railway sets…).
Move onto early twenties I started writing another romance drama that got to about page twenty. Read it again recently – scary! The ‘hero’ was obviously based on my husband. Trouble is I was married to someone else at the time. Mmm – probably accounts for why both that particular story and then my (first) marriage came to a grounding halt!
Late twenties; Hubbie- affectionately known as ‘Sinnaman’ (and current(!) of many years duration) told me to either write or book or shut up about doing it (in the nicest possible way). I thought about this and decided I didn’t want to die thinking I should have. So I wrote two complete novels (psychological dramas) and submitted both. The second got an agent and to the last phase at Random House. Deciding I didn’t like rejection and that I’d given it my best, I took a job promotion in something I was good at (and got paid a lot) and am quite passionate about.
Then last year we went on a 2038km (about 1400 miles) pilgrimage across France and Spain (yes walked every step, took 87 days) I decided I was still passionate about fiction writing (in my main job I have published nonfiction) and wanted to get back to it. Fortunately I am at the stage in my paid job that I can work part time and still keep afloat. Prior to going on the walk I had been living in New York and wrote Embedded on the train commute to Yale. Its acceptance happened after I decided to go part time – as did getting short listed for an erotic short story competition which is now published (see below on how to win a copy!) and another short story also has been accepted for publication.
The heroine in Embedded is going to return in Exposé (coming out in April as an E-book, print in August, with Siren) where she’s involved in a film crew filming along the Pilgrimage trail. It was a great way to relive a terrific walk without blisters! 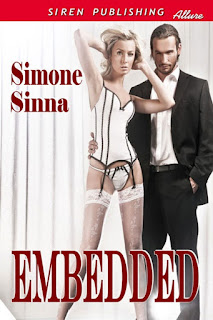 My first book Embedded comes out in print February2012!!! (or as an Ebook) Also available on Amazon.
Here’s an adult excerpt! In celebration of the Australian Tennis open I’ve picked an early scene (before she meets up with the hero) where New Yorker, Stephanie, 29, an investigative journalist, is on the way to Australia in Singapore first class lounge, and gets up close and personal with a professional tennis player heading there for the tournament.
As soon as the shower-room door was closed, Stephanie looked at Matt. Her moment of bravado had passed, and she was relieved to see that Matt was not feeling entirely comfortable either. He was attempting nonchalance, as if he regularly showered with attractive strangers, but she could see he was nervous. He pulled off his shirt, and Stephanie looked on appreciatively, her skin tingling in anticipation of what might lay ahead. Youth had its advantages. His back muscles rippled as he worked his jeans down.
He turned around, still in his Union Jack briefs. ‘Are you showering fully clothed?’
‘Just admiring the view,’ Stephanie replied.
Matt grinned, dropped the briefs—this really was a very well-built young man—and stepped closer. ‘May I?’
Stephanie didn’t answer, aware of the smell of his masculinity and the electricity it sent through her. Matt hesitantly put his hands out. She guided them to her top, and he began undoing buttons, kissing her neck as he did so. She could feel him against her and remained quite still, closing her eyes, soaking in the feeling of being desired. The blouse off, he quickly dispensed with her bra. She leaned back against the sink as his kisses covered her torso, lips lingering over her nipples. Matt’s breathing quickened. His hands went to her jeans, slowly undoing them, easing them down. Then he was gone.
Opening her eyes, she saw he was sitting on the floor, watching her as he peeled a condom over his cock. Momentarily self-conscious, she put a hand over the light fuzz of her sex.
‘No, don’t, please,’ Matt pleaded. ‘You’re the most beautiful woman I’ve ever seen. I want to soak in every minute because I’m sure I’m going to wake up and find this is all a dream.’
‘No dream,’ said Stephanie, smiling as she twirled around. ‘But if we don’t hurry, we’ll miss the plane.’
Matt grinned. ‘Let’s get the next one.’ He moved closer, his hands on either side of her hips, his tongue in her belly button.
Stephanie, teasing, grabbed her pile of clothes. ‘I really can’t miss this plane—’
Matt grinned, flicked the shower tap, and pulled her, clothes still in hand, under the water. Stephanie shrieked, but Matt pulled her to him and drowned her cry with a kiss, running his hands over her body. Stephanie gasped, feeling his erection against her, water tumbling over her head and down her cleavage. He massaged her breasts then spun her around so her back was against his chest, his hand teasing her nipples as he pulled her against his rock-hard cock. The hot water streamed over them, into mouths and eyes, running over their bodies as they rocked in tune. Matt cupped one hand over her breast. The other moved over her mound to find her clit.
Stephanie moaned, her butt wriggling into his groin until Matt suddenly released her, pulled her hips into him and, with a quick whisper in her ear to check that she was up for it, thrust his cock into her. The speed of it took away her breath. So much for the men of tomorrow, this one was well and truly already here today! Stephanie leant forward, panting, her hands supporting her on the shower wall.
Matt was every bit as fit as he looked, with alarming stamina and gymnastic ability. Forget football players, she thought. Matt eased her to the shower floor. The break was good for her aerobic issues, but she began immediately wanting him back inside her. Matt took one leg, gently sucking her toe, watching her as she failed to contain the exquisite pleasure he was affording her. One hand began to gently caress her calves, and as it worked up to her inner thighs, she gasped. His mouth now took each toe in turn, his tongue occasionally tickling her insole, all the while his hand working up and down her legs, always stopping just short of her most sensitive part. After a few minutes he took the other leg and gently sucked one toe, and just when she thought this leg, too, was to be given the same treatment, he put a leg over each of his shoulders and moved closer to her. As he did, the breadth of his shoulders and the narrowness of her hips meant that her legs had to part just a little, and in doing so she was aware that she was exposing the lips of her sex, glistening with her moisture. Clothes around her now forgotten, Stephanie gasped as Matt entered her again. The pressure of him against her clit, with his cock now even deeper within, accelerated her excitement. Not sure she’d survive in the position, the shower floor hard against her back, she focused within. Rocking her hips and trying not to shout too loudly, she climaxed.
But Matt had not finished. Putting her legs gently down and swiveling her over, he took her from behind, on the shower floor. Stephanie was aroused again. The change in pressure and his persistence was enough to wake her up. She felt herself rocking again in frantic response, feeling his hardness, his hands so firm on her hips that they were likely to leave bruises, and rather than feeling pain, it added to her arousal. She let out a loud, ‘Yes’ and came again, followed by Matt, finally releasing. They lay spent as water cascaded over them both, cleansing and rejuvenating.
‘Wow,’ said Stephanie, finally. ‘Watch out, Roger Federer!’